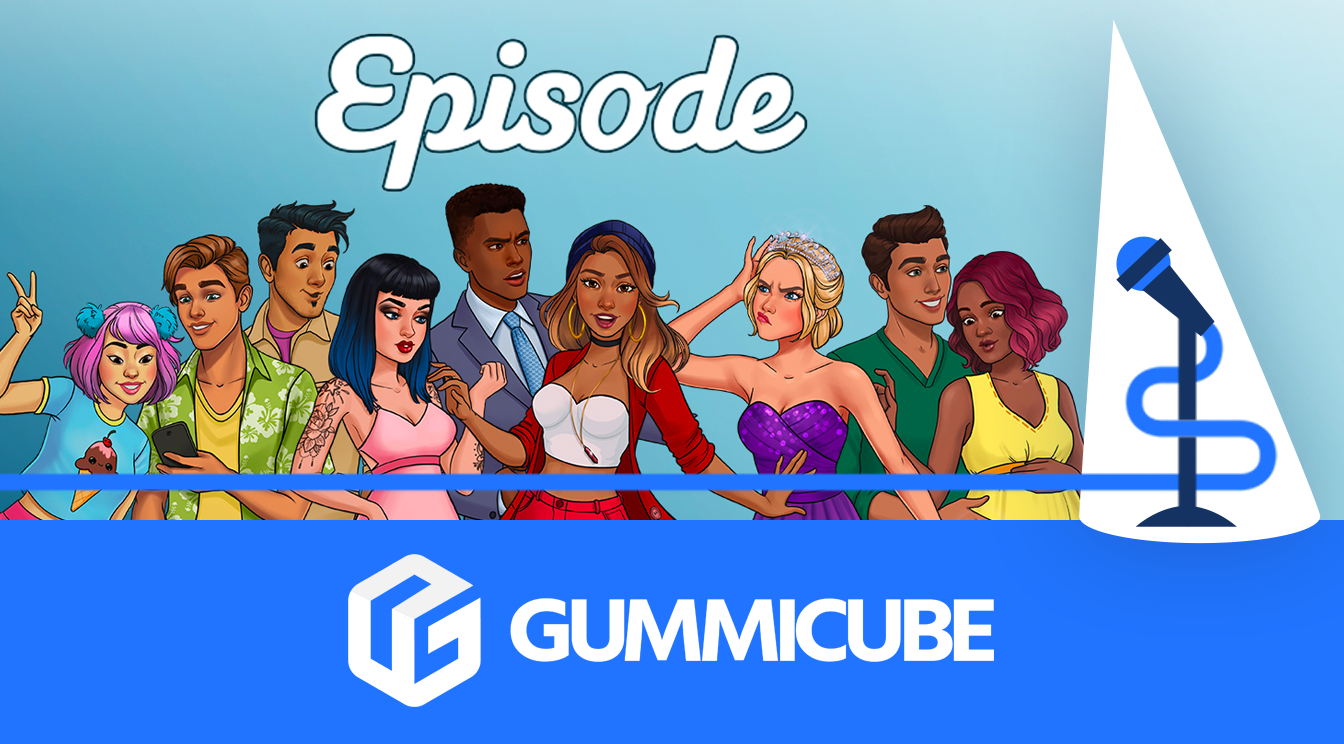 Immersive storylines filled with drama, romance, deceit and adventure await you on Episode. In this “choose your own adventure” mobile game, users can choose from over 15,000 stories with a wide variety of genres like murder mysteries, romance, drama, adventure and so much more. Every decision leads to a different outcome – choose your next move wisely.

The Episode app first rose to popularity when it rolled out its external marketing campaigns on social media. Episode’s strange, yet hilarious in-app gameplay callouts became viral among internet celebrities and influencers.

Episode has a story for just about everyone; making it the perfect game for users looking to escape from their everyday. However, their current store listing lacks some core App Store Optimization best practices. To succeed on the App Store, Episode should build on its organic visibility to reach a broader set of users looking for an immersive, choose your own adventure game.

The Episode app is using a branded title with a brief title tag. Title tags are a great way to maximize the full space allotted for keyword targeting with descriptive keywords that follow the app title. They serve to increase the number of terms that an app can be indexed for.

Both Google Play and the App Store use the 30 characters in the app title for indexation, so it’s essential to use these fields to their fullest. Episode currently uses the title tag, “choose your story” which explains the game genre.

On the App Store, keywords in the title, subtitle and keyword bank are webbed together to create strings of keywords. The keywords that get strung together are the phrases that your app gets indexed for.

Currently, the Episode app has three words in its subtitle that may not grant them the best opportunities to create high-volume phrases. Apps in the same category have additional keywords that expand upon the genre for additional visibility like the plural, “stories”, or “interactive” to describe functionality.

To rank for additional terms, Episode needs to fully maximize the potential of the subtitle. Users may not be searching for the phrase, “choose your story” even though that may be their intent when looking for an interactive game. ASO technology like DATACUBE helps developers better understand what keywords best represent their app and capture user intent.

To drive conversion, creatives and app metadata should be optimized synergistically. Creative elements like screenshots, app icon and feature graphic all speak directly to the user. None of the copy or images are used in the indexation process, so all callouts and visuals serve to directly influence the user towards a download.

As an immersive game, it's important to have equally immersive screenshot elements to draw the user in as if they’re playing the game.

Feature videos are an excellent way to introduce in-app features and gameplay. This is especially true of games that have a high level of interactivity and dynamic features to showcase. Since Episode’s game relies highly on decision-making, highlighting the decision-making process the user can expect in a feature video can provide users with a more immersive glimpse of gameplay versus screenshots.

Moreover, an increasing number of popular competitors in the category like, “My Fantasy” have incorporated a feature video in their screenshot set. This makes them stand out from apps that aren’t using videos in their creative elements and in turn, they convert more users in the process with an engaging creative element.

There are plenty of design elements and best practices that help developers convert users. An ASO company can help you create screenshots and other creative elements with designs proven to drive conversion.

Episode has made a splash on the App Store. Episode Interactive was able to garner the attention of the internet social space in a way that other app developers find quite difficult to do. It approached its external marketing with an element of risk and shock; allowing them to gain interest among users and build a reputation as the go-to for story-hungry users.

The key to growth on the App Store; however, relies on the synergy between paid and organic performance. Episode Interactive must supplement its paid campaigns with ASO best practices to reach even greater success on the App Store.