IMVU is an online avatar-based social platform, founded in 2004. It offers 3D characters and the largest virtual goods catalogue, boasting over 30 million clothing items and accessories. IMVU’s millions of users create content, make and join user groups and interact in a virtual environment with custom avatars.

After working with Gummicube to optimize performance in the US, IMVU wanted to expand into the Asian market, specifically Japan.

DATACUBE, the app store analytics platform owned by Gummicube was used to understand keywords trends, ranking, competitors positioning and market insights.
Gummicube began with thorough research into the Japanese market and trends to understand popular positioning tied to IMVU’s genre. This included extensive keyword research and creative trend analyses using Gummicube’s DATACUBE to understand how competitors position their app and how IMVU currently performs in Japan.
In the US market, IMVU’s core terms included related ‘avatar, social, virtual’ phrases. In the Japanese market, IMVU has to compete with other avatar apps as well as a different set of social/chat competitors, such as LINE. Datacube identified that popular keywords in the Japanese market included translations of “avatar” as well as phrases related to “character”:
With the competitive social/chat genre, the initial strategy for the Japanese market was to focus on avatar/character related phrases and first establish IMVU in its core features. Then the strategy could expand to test performance more heavily for social/ chat related terms.

Results were evident after deployment with IMVU’s rankings for total ranked terms increasing by 96% from 26 terms to 51 terms and the number of terms ranked in the Top 5 increasing by 75% from 8 terms to 14 terms. These results included the following ranking changes for core terms:
These new keyword rankings and improvements in ranking caused impressions (users who see the app in the store) to increase by 10.4%

After optimizing the metadata, Gummicube shifted to the creative elements to focus on conversion and capitalize on the new impressions. Gummicube created and tested different creative assets using Gummicube’s Splitcube, including the icon, screenshots and feature graphic (GP only).
Gummicube first provided research into the differences between American and Japanese visual elements. Overall when comparing the American market to the Japanese market, Japan uses:

Splitcube, an A/B testing platform owned by Gummicube was used to test and measure the performance of different creative variants. 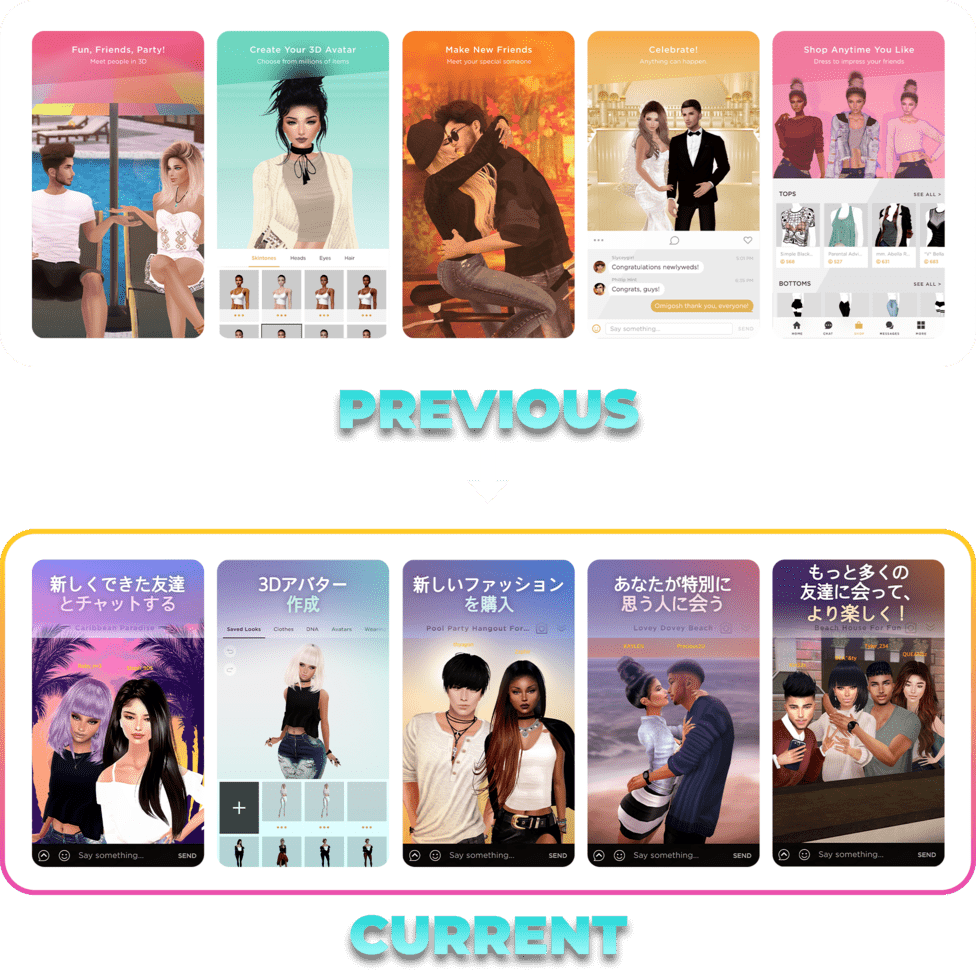 Gummicube tested three different avatar variants against the previous icon with a black background and IMVU’s logo. All three variants outperformed the black icon, with the winning icon performing the best.
Possible further testing could include testing different avatar appearances and placements.

Icon Testing
IMVU’s screenshots were tested using Splitcube, using IMVU’s paid traffic. Running the paid traffic through Splitcube allowed Gummicube to measure conversion performance with a live audience.
The test was set up to measure click-through rate from an App Store search result to a download. IMVU’s icons were tested against true search competitor icons to understand performance in a true-to-life scenario. Users landing on the test were shown one of four icons.

Through testing, the Winning Icon resulted in a higher click-through rate, with the highest click-through rate throughout the test. The winning icon was deployed after the test concluded, first in Japan, then rolled out globally.
Screenshot Testing
By targeting game-based keywords, IMVU began to overtake competitors that were previously utilizing similar terms. At the start of the campaign, IMVU ranked #12 for “avatar game,” but rose to the #1 spot after integrating the recommended keywords . Similarly, it became the top-ranked app for “social games” and ranked in the top five for terms such as “chat games” and “virtual games.”
While the initial keyword, metadata and Search Ads optimization resulted in excellent performance, there was still work to be done. The next area of focus was conversion optimization. This involved updating and testing the creative elements of the IMVU app page and search listing.
Prior to the optimization, IMVU’s icon was a speech bubble with the app name overlaid against a black background. When compared with competing apps, we found that icons featuring avatars on a bright background performed the best. Furthermore, integrating logos helped maintain brand identity. Although including multiple characters is visually stimulating, having one serve as a focal point for the user to look at provided the most positive results.

We found that the strongest performing screenshots in the category contained clearly visible calls to action that highlight key features. The designs that tested best included characters placed in the foreground as focal points. This analysis helped us determine the best elements to integrate into the IMVU screenshots, including how to best utilize branding, callout text and screenshot orientation.

The results of the testing allowed Gummicube and IMVU to select a new icon and set of screenshots. As a result of the optimization, IMVU’s daily installs increased by 45% on Google Play and 105% on Apple devices.
Similar to the icon testing, IMVU’s current screenshots were tested to measure user response to click-through rate in a search result view.

After running paid traffic, the new screenshots tailored for a Japanese audience trended higher over the original screenshots. The winning screenshots were then deployed in Japan.

Together, IMVU and Gummicube upgraded every aspect of IMVU’s App Store Optimization resulting in significant and sustainable growth across territories. First updating the metadata elements increased impressions by 10.4% and then app units increased by 23.9% through conversion optimization and creative testing with Splitcube.