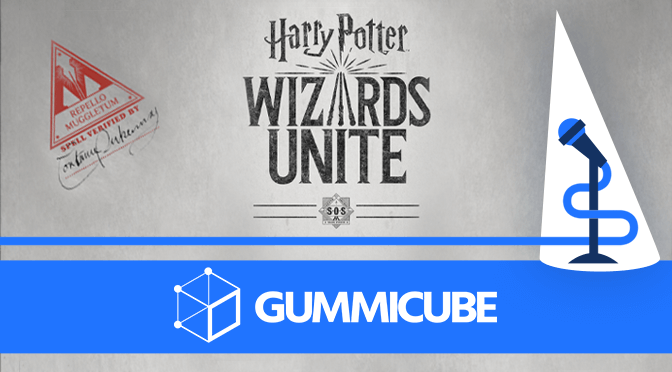 A few years after Niantic’s smash hit app, Pokémon Go, the company is attempting to recreate the same magic with Harry Potter: Wizards Unite. As with Pokémon Go, the augmented reality app is off to a strong start, quickly gaining high ranks for several keywords, but its early momentum can only take it so far – Wizards Unite will need App Store Optimization to keep up with the high expectations users have placed upon it based on Niantic’s past success. So, without further ado, let’s take a look at Wizards Unite for this week’s App Store Spotlight and see if it can cast a spell on its optimization.

On the Apple App Store, Wizards Unite has already claimed the top spot in the Adventure category, although this is in part due to the early rush of “Harry Potter” fans and players looking to try Niantic’s newest game. It’s the top app under searches for “Harry Potter,” as well as 2nd for “Wizard.” Due to Niantic’s association with Pokemon, it also appears in searches for “Pokemon Go” (#2) and “legendary Pokemon” (#4).

Its rankings in the top ten include placing 7th for “Magic” and “AR Game,” 6th for “spells of magic” and 8th for “roleplaying games.” Its rankings begin to get lower for terms like “wizard game” (#22) and “augment reality” (#48). Many of its current rankings also include generic terms that are constantly shifting as new apps are added, like #3 for “best new free games” and “cool new games,” so those rankings are not expected to last. It’s similar to how Pokemon Go dominated those keywords, but now it’s no longer ranked for them.

Creatives: Wizards Unite’s creative set starts off very strong. It opens with a video showcasing multiple aspects of the game, including various spells, combat, potion brewing and the augmented reality features. It’s accompanied by music that invokes the mood and tone of the “Harry Potter” movies to appeal to its fans. 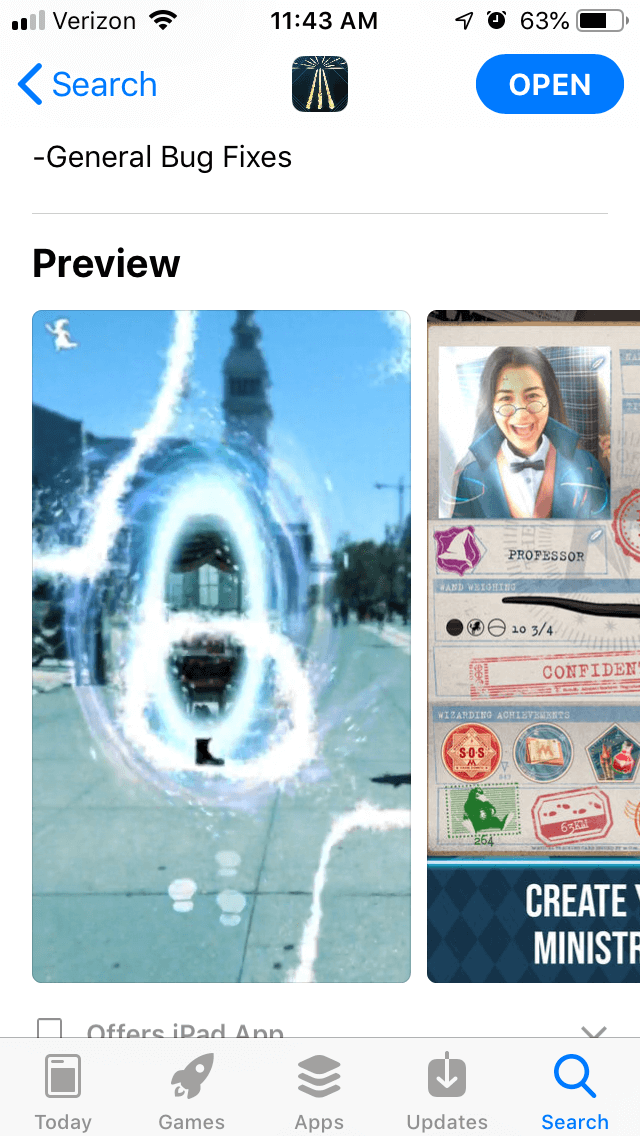 The following screenshots all focus on different features, accompanied by callout text on the bottom. They show the users making a ministry ID, casting spells, exploring areas in augmented reality and so on, starting with the most appealing features then working down from there. It uses nine of the ten screenshots Apple allows, so while it could fit in one more screenshot, the set it has is effective.

The callout text could be emphasized a little to stand out more. The text is a little dull and placed on a basic blue checkered background. It doesn’t draw attention to any keywords, and some phrases, like “explore iconic wizarding world locations” are a little lengthy. So while overall the screenshots are chosen well and demonstrate the full range of the app, the callout text can still be improved.

Title & Subtitle: The app’s full title, “Harry Potter: Wizards Unite,” uses 27 of the 30 characters Apple provides. This establishes branding both in relation to the “Harry Potter” franchise but also the game’s own name, while using as much space and as many keywords as possible.

The subtitle, “The Magic Is All Around You,” also uses 27 characters, but is less keyword-heavy. The only valuable keyword there is “Magic,” as “all around you” terms do not get high search volume. This could instead be revised to use terms like “explore” and “augmented reality,” which are both relevant and high-volume terms that the app can improve its rankings for.

Description: The description for Wizards Unite provides a lot of information, but it’s presented in large paragraphs. When viewed on an iPhone, a single section takes up nearly the entire screen, making it hard to take in at a glance. Users scrolling through will skip most of the paragraphs and only gain a little information from them. 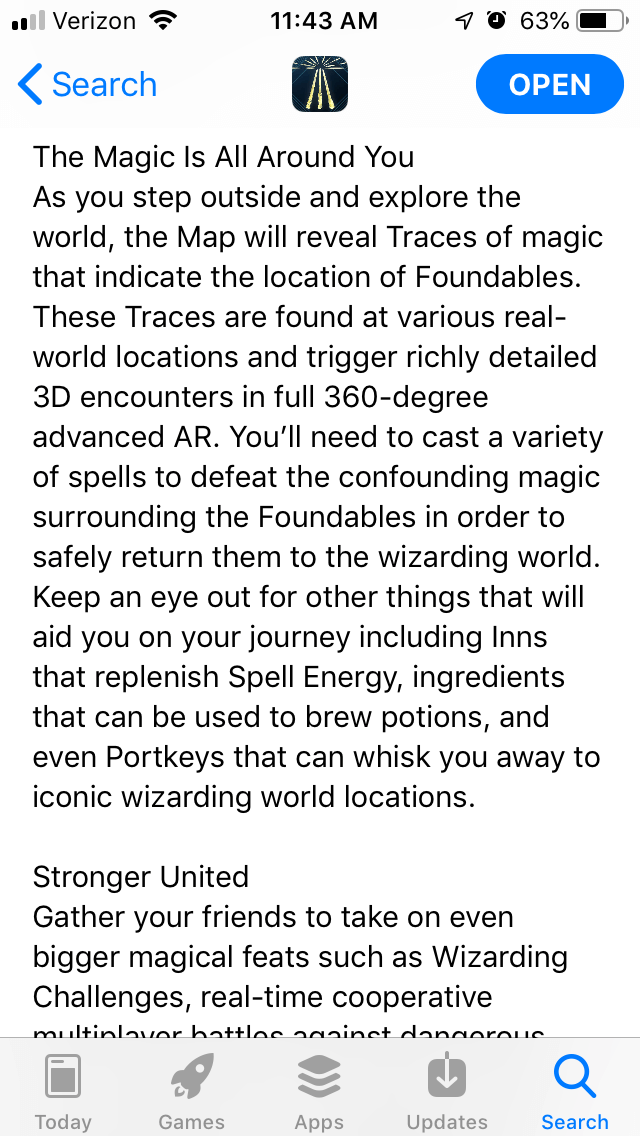 This can be fixed by making a few small changes. The introductory paragraph can be broken into smaller sections, using separate lines for information like who developed the game and what it provides. This can also add more introductory information about how the game works and its story.

The feature sets can also be turned into bullet lists. These are easier to read than lengthy paragraphs, and they provide pertinent information that users can get at a glance. This small change would make the description easier for users to read and provide information more effectively, which could improve conversions.

On the Google Play Store, Wizards Unite is currently the “Top Free Game” in the Adventure category, as well as the third top grossing. It’s the second highest app for “Harry Potter” and “Harry Potter Games,” as well as the top app for “wizard.” It also ranks #6 for “Hogwarts,” and #17 for each of the Hogwarts houses, except for “Slytherin,” which it is unranked for.

However, as it is new, there are many terms it still does not rank for. The app does not yet appear in searches for “Magic,” “Augmented Reality” or “Cast Spells.”

Creatives: Wizards Unite uses a very different video on Google Play than on iOS. In this case, it focuses more on people playing the game than the gameplay itself, showing people walking around the world and experiencing the augmented reality features. The music is upbeat and cheerier than the more mystical tune of the iOS video, emphasizing the social aspect over the magical.

Google Play allows app videos to show footage from outside of the app itself, so Niantic has more leeway with what they display here. While the iOS video is limited to only what is available within the app itself, the Google Play one can show users walking around, exploring the world and interacting with friends. This focuses on the AR features and social aspect of the game. While it does quickly show various features such as the magical battles, these are typically seen either over a user’s shoulder on a screen in the video or on half the video screen while the other half shows the players using the game.

The eight screenshots it uses are nearly identical to the ones on iOS. Each one still showcases a different aspect, accompanied by callout text. They’re formatted the same, with the callout text on the bottom with a minimally engaging design. As with iOS, they’re ordered going from the most popular features and on.

Description & Metadata: The description for Wizards Unite is the same on Google Play and iOS. In this case, many of the same issues remain, in addition to its lack of keyword targeting.

As with iOS, the description can be broken into distinct sections. In this case, it’s less about the length of the line and more about effectively communicating the information. For instance, the introductory paragraph is half about the game itself and half about the different companies that developed it. By splitting it into two paragraphs - and adding a few extra paragraphs to cover the additional details and features of the game - it could more easily provide relevant information to its users.

Similarly, the feature sets could be broken into bullet lists for ease of reading. Using bullet lists for each distinct feature or aspect helps users quickly glance through the description and learn all the pertinent information. As it is, the features are “Realize Your Wizarding Potential,” “The Magic Is All Around You” and “Stronger United,” which can be adjusted to be clearer about the game’s mechanics.

Finally, the description is not written with keyword optimization in mind. Google Play descriptions need to be written with keywords utilized frequently and at the front of each line to target them. As it is, Wizards Unite begins its lines with phrases like “A calamity has befallen the wizarding world” and “Gather your friends to take on even bigger magical feats,” which are not keyword-focused.

This is another instance where feature sets with bullet lists would benefit the app. Each feature set and bullet can call out a keyword the app is targeting, like “Augmented Reality Game” or “Cast Spells,” then provide additional information that utilizes keywords in the following bullets.

Wizards Unite is off to a strong start, due in part to Niantic’s previous app success and the popularity of the “Harry Potter” franchise. This has helped it rank well for many valuable keywords, although it still has room to grow on both stores as the algorithms find more terms for it to target.

However, initial momentum alone is not enough to keep an app competitive forever. Wizards Unite uses strong creative sets, with engaging videos on both stores, although it could make its callout text bolder. Its description is the same on both stores but is not fully optimized for either. In the case of iOS, it could split its lengthy paragraphs into shorter lines, while on Google Play it could focus on targeting keywords. Both descriptions could also benefit from bulleted feature lists and additional information about the app and its gameplay in the introduction.

Wizards Unite is bringing the magic of “Harry Potter” to iOS and Android devices, it just hasn’t quite earned its Hogwarts degree in App Store Optimization yet. With a little more enchantment, it could improve its keyword rankings further and reach an even wider audience.