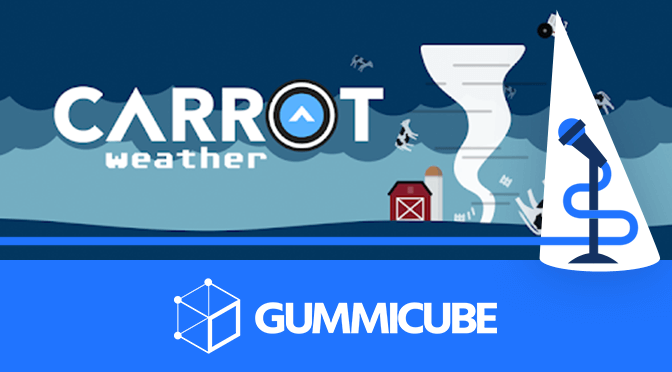 What does an App Store Video say about a mobile app? The video can show your app in action, showcase its top features and much more, as long as it’s designed well.

With summer beginning, Apple showcased Carrot Weather as an “Essential app for the weeks ahead.” When users view its page, they’ll quickly see the promotional video - will it help convert them? For today’s App Store Spotlight, we take a look at Carrot Weather and find out.

Carrot Weather features two videos on the Apple App Store. Each one serves a distinct purpose.

The first preview video, which will automatically play when users view the app or find it in search results, provides a general overview of the app.

This video shows various aspects of the app, including searching weather maps, exploring weather conditions by time and customization. This walks users through the functionality and tools in a straightforward manner.

While the video includes a voiceover, it’s a robotic-sounding voice from Carrot Weather’s voice assistant. The video explains this by saying Carrot is “a crazy-powerful weather robot,” and as the voice assistant is part of the app, including it does demonstrate the user experience. Even without audio, the visual content makes the functionality clear.

The second preview video is less of a commercial and more of a demonstration of a specific feature. This is entirely focused on the augmented reality function, where users can pull up weather maps overlaid on a real-world environment.

Visually, the video shows how the interface looks and moves the phone’s camera around slightly. This illustrates how it looks and acts in augmented reality, but there’s one other element that makes it really stand out.

A good App Store Video needs to show what makes an app unique. With this video, Carrot Weather shows what it has that makes it stand out from the competition: humor.

The video includes humorous text, both on-screen and spoken, to accompany the visuals. Carrot’s robotic voice states “Who cares about the weather for the rest of the week? There’s only a 42% chance you will live to see it” and provides a forecast of an oncoming zombie horde.

What Competitors are Doing

Do these videos help Carrot Weather stand out from the competition? To understand that, we need to look at what other apps are using.

The Weather Channel uses a video that, like Carrot Weather, shows features like maps and alerts. The tools are shown with a touch interface dot to indicate the touch controls, as allowed in Apple’s video guidelines.

Instead of using a voice-over, this video includes text on the screen to present value propositions like “see ahead with future radar” and “real-time alerts when you need them.”

The video includes a musical score commonly used by The Weather Channel. This keeps it engaging when the sound is on while building a sense of familiarity for viewers.

The Weather Live app bills itself as “the most beautiful weather app” and uses its video to present this value proposition.

The video shows a variety of weather forecasts, each one with the weather overlay set over a different background. Each background is scenic and related to the weather conditions, showing the visuals while demonstrating how it works as a function of the app.

Unlike the other apps, this one does not showcase any other tools. While its screenshots include additional features, the video is focused on showing users one thing: just how good it looks.

The purpose of an App Store Video is to show what an app can do and what makes it unique. Carrot Weather accomplishes this by using two videos, highlighting its functionality and including its humor with its AR video.

Very few weather apps include videos. Those that do provide a key factor that makes them stand out. This can help the app rise above its competition and increase the odds of users converting.