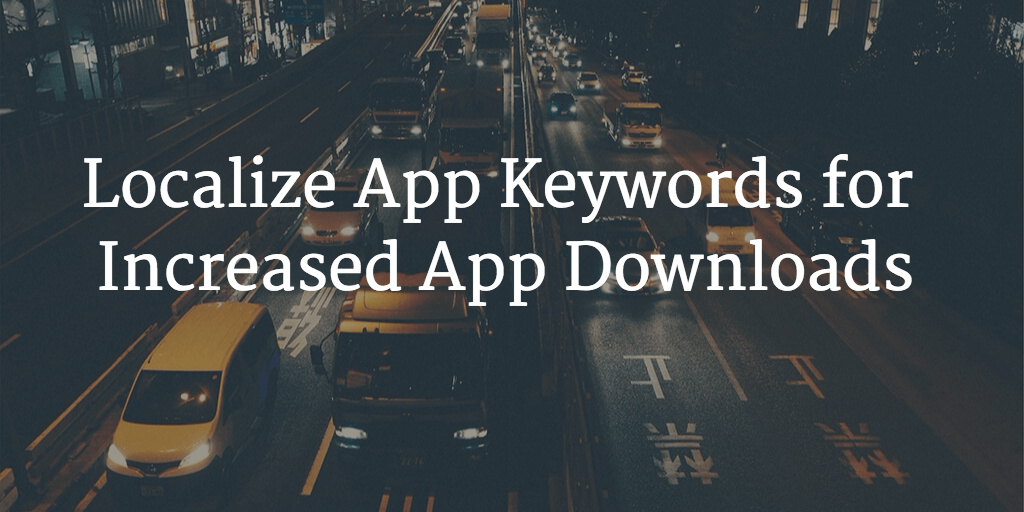 Answer: All of them! There’s users and revenue in them there hills.

While localizing your entire app may make sense, there is a way to test the market before committing to a full localization - localizing only your app's store listing metadata. Even before localizing your app screenshots or icon, you can get an idea of the potential ROI of a complete app localization by starting with localizing and optimizing the keywords and phrases your app targets in the app metadata. Since the descriptions and app title in Google Play and the app name and keywords field in Apple are built off of the phrases you are targeting - we’ll focus why and how to localize app keywords in this post.

When localizing, you may decide to keep the app name consistent but change the features or tagline that follows the app name using words the localized target market is using to find apps like yours. OK - where do I start? The Apple App Store distributes to over 150 countries in over 40 languages. Looking at the downloads and app store revenue generated by each country can help us focus our efforts. China, US, Japan, Australia, UK, Germany, Canada and France are the largest iOS app stores by volume and revenue. South Koreans and Asian app consumers in general tend to spend more per user than their western counterparts, especially on games - so adding South Korea to this list may make sense as well. China has become too big to ignore. The US, UK, Canada and Australia are all English - which makes the localization effort a bit easier. French is represented in Canada and France. With a little effort you can localize and optimize for 5 huge app stores (countries) in addition to the US.

For the app title in Google Play, we recommend a format of:

The largest Google Play stores by revenue are the US, Japan, South Korea and Germany. Brazil, Russia, India and Mexico drive significant downloads.

Avoid a straight translation from Google Translate. The process of localizing an app listing for another country looks a lot like your ASO process in English.

The same questions should be answered for each app store you are targeting. Aim for the meaning vs the literal translation We have talked quite a bit on this blog about the difference between how users search the web and how users search the app stores. Just like how it is not a good idea to use web search data for determining relevant app store search terms or traffic, building a list of target keywords and phrases in a new language should not just be a translation of your existing keywords field. When you spend any significant amount of time in a foreign country - the amount of communication using colloquialisms or idioms becomes hilariously apparent. This is as true for Americans visiting England as it is when visiting Colombia or Russia. Even San Diegans and folks from Montgomery, Alabama have completely different ways of communicating ideas. Consider that the Apple App Store has 4 types of English (US, Canada, UK, Australia). The approach of hiring a writer to translate your descriptions using your localized app keywords will cost a bit more but the alternative - hiring a writer to provide a literal translation - is probably not worth doing at all. As with much of optimization - measure what works, improve what doesn't and increase the investment in localization as the ROI becomes more clear.