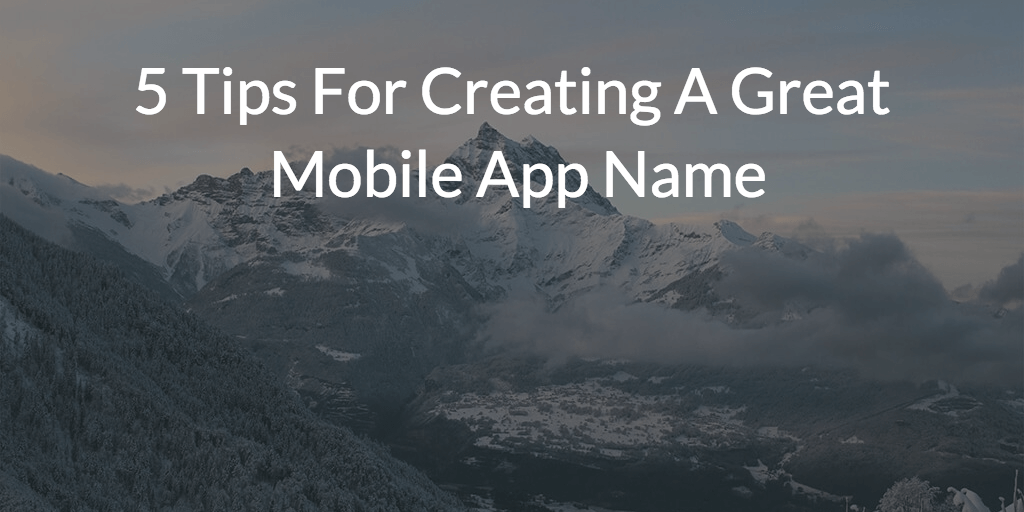 The App Store is the holy grail of mobile app user acquisition. Curated and exceedingly well-stocked, there are over 1.5 million apps and growing in both the Apple and Google Play app stores. Unfortunately, it is also a place where an app can easily be forgotten, especially when it attempts to muscle into a particularly difficult part of the market. If you want to chase your fortunes in the mobile app stores, or connect with more customers on the medium they increasingly prefer, every aspect of your application must be polished. The very first element of your app a potential user will see - whether when searching the stores or browsing - is the app name. A great application name must: - Avoid confusion - Stay on brand - Clearly communicate value - Aim for Relevance - Stand out on the global stage Without a strong app name, your app will likely lose out to competitors even if their apps are not as good. Below are tips that will allow you to get the most out of your app's name.

Having a sound-alike name can be useful if you are looking for a clone to pump out short-term cash, but creating something that confuses consumers is not useful over the long term. There are plenty of apps on the store that have a name that is closely related to something more popular without being confusing to consumers or purposely misleading. Tweetbot is a good example. Their app's core functions are managing tweets and Twitter accounts - so they have "Twitter" in the name.

But the copycat app "Tweetbot" is named to purposely confuse consumers who mistakenly think they are buying the "Tweetbot 4 for Twitter" app. Apple and Google will approve your app name/title as long as it is not a direct match with another app listed in their store. It is up to you the publisher to make sure your app name is not so similar to an existing app that consumers are confused about what they are getting.

Your mobile app name is an extension of your brand. Take a look at the best-selling and most installed apps on the front page - they're incredibly clear about the companies behind the product. Some apps, like Facebook or Twitter, simply use the name of the company's service. Other apps, like Microsoft's SmartGlass or any of King's various Match-3 games, follow a naming scheme that is closely related to the company's other efforts.

Familiarity helps consumers remember your app, while anything that goes too far outside the norm will simply confuse them. Try to stay on-brand because that's what consumers will expect from you.

One of the worst things you can do with an app name is to attempt to be overly clever. Let the consumer know what your apps does and how it can benefit them - don't try to confuse them. For indexing and conversion - we recommend using specific features in your app name. It is important for ASO and it is important for conversion as users understand immediately what problems your app solves, or what to expect upon install. Try to stay away from overly technical jargon and amusing plays on words in favor of simple names that help users find your app and understand what your app does. If you look at the average number of words in the best selling apps on Apple's App Store, you'll find that the big winners tend to average somewhere between three and five words. Much of this is due to many having very identifiable brands - but keeping the core name of the app (the app name before any mention of features) is generally advisable.

Understand the Difference Between the Apple and Google App Stores

Each store has it's own requirements and tools (and name) for the App Name/App Title field. Apple's App Name is 255 has a 255 character limit but we strongly discourage using any more than 80. Google's Play Store uses a App Title field which is limited to 30 characters, but provides tools for testing different names on a portion of your live store traffic and by country as well. Check out our App Name guide for Apple and our Google Play App Title guide.

Many of the best performing apps are those with global appeal. Unfortunately, it's very difficult to translate certain concepts into other languages. As such, it's important to take a global view of your app name before putting it up for global sale. Some of the greatest marketing blunders in history have come about because marketing departments weren't doing their due diligence looking at the translation of certain product names into other languages - and it's important that you don't make the same mistakes. Even if localizing your keywords, app listing or in-app content is not in your current plans - it is better to make an effort now than have to change something as major as the app name when you are ready for broadening your market base. Check to make sure your app name doesn't have unwanted connotations when it's introduced into new markets and double-check to make sure someone else isn't already dominating the market with a similar name.

The app name or app title is a unique app listing field in that is plays a big role in how your app is indexed, how well it converts app store views to users, and how well it retains users once the app is installed. Use ASO best practices and the above tips for creating an app name that will serve your mobile app efforts for the long-term.