Love physics games? How about puzzles? Sugar (game) aims to bring the best of both worlds in simple yet fun minigames that put your problem-solving skills to the test. Having recently enjoyed a visibility boost thanks to a feature in the App Store, the app’s developers will no doubt look to build upon the growth achieved to further improve their position and downloads.

Today’s App Store Spotlight will go over the App Store Optimization strategies the developers at Sugar (game) can adopt to improve their chances for App Store success now and in the long run.

Developers should look to keep the app's metadata and creative sets updated to keep current users informed and evoke interest in potential users. Aligning those updates with ASO best practices can help maintain footing in the Games category's competitive landscape and succeed over time.

The developers at Sugar (game) can adopt ASO best practices to improve their ranking and conversion rate to become a major player in the puzzle and physics game space with adjustments to their title, description, and screenshots.

Top-performing apps in the puzzle game category utilize a common ASO practice within the titles – title tags. Understanding how App Store indexation works is key to knowing how the introduction of title tags can greatly benefit an app’s ranking.

When developers submit a new build, Apple’s algorithm will scan specific metadata fields for keywords and phrases that may be relevant to the app feature set, gameplay, functionality, and more. This indexation process then determines the app’s relevance to the included terms and provides preliminary rankings accordingly. This rank is later affected by factors such as click-through rate, downloads, and competitor performance, hence the importance of choosing the right terms for an app title off the bat.

The title is the first copy that a user sees that impacts indexation. Title tags are a great way to fully utilize the 30 characters allotted and build relevance for game-related phrases. For example, of the apps found in the top five results for “puzzle”, four of them include “puzzle” itself or a variation of it. 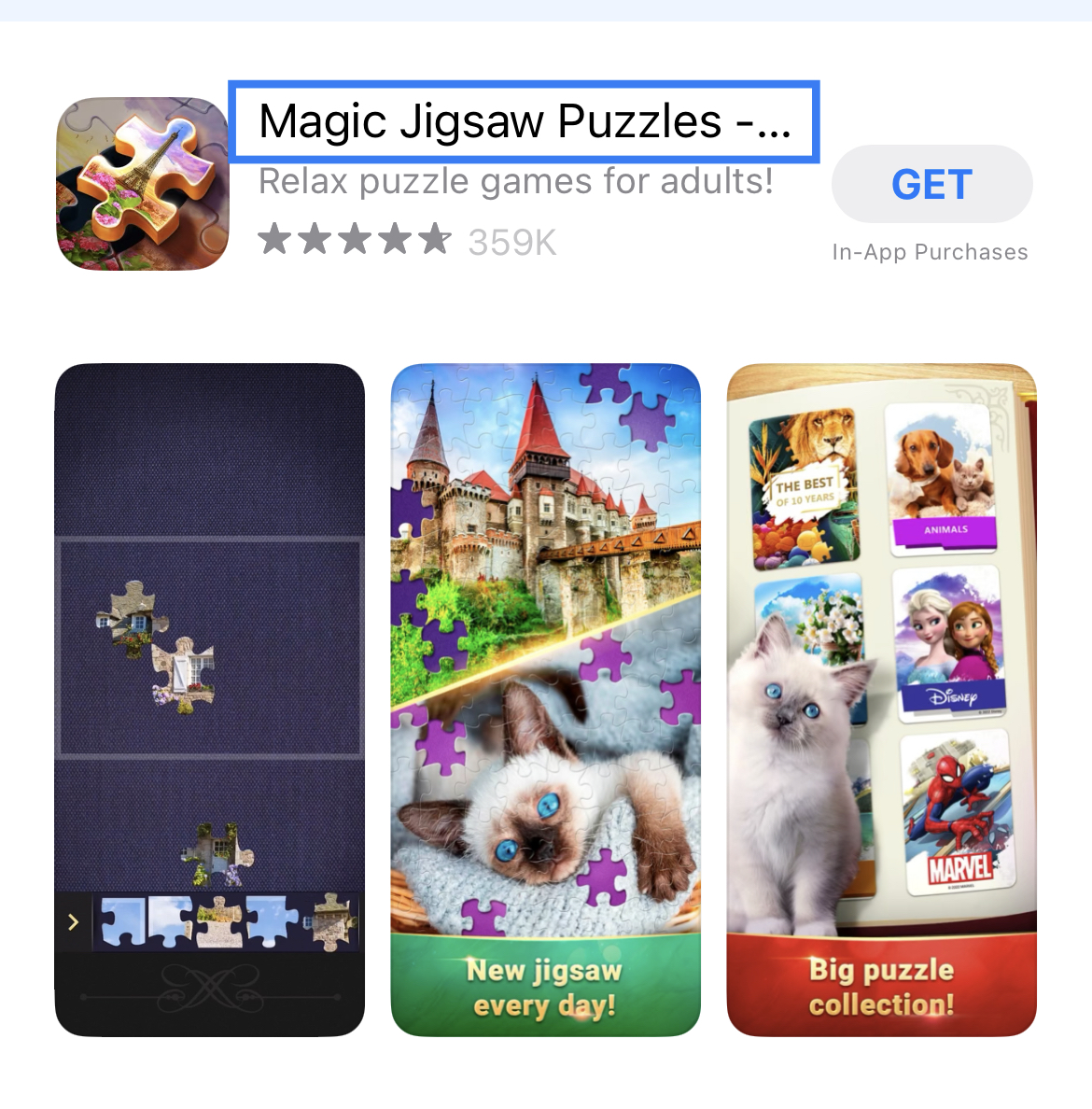 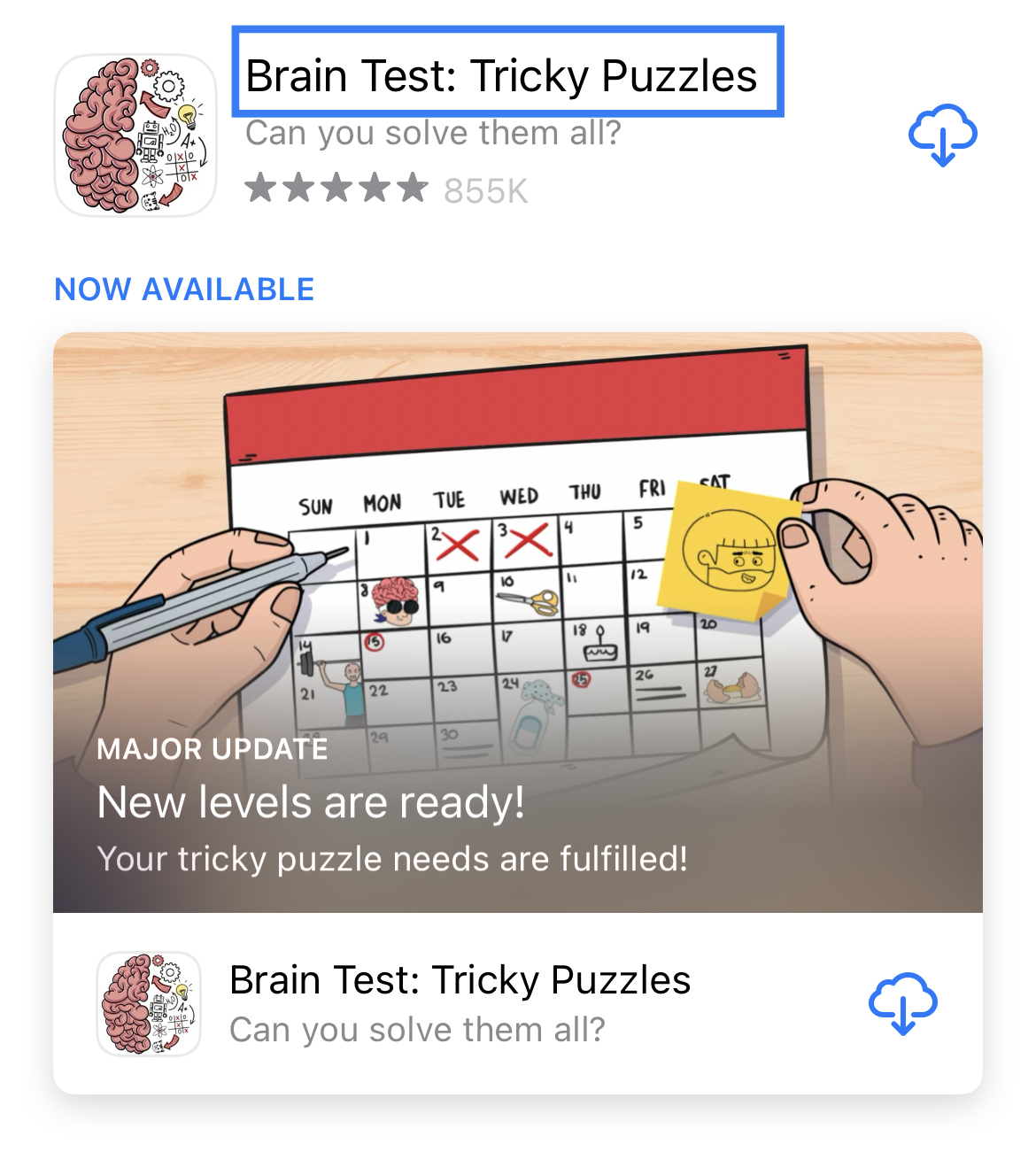 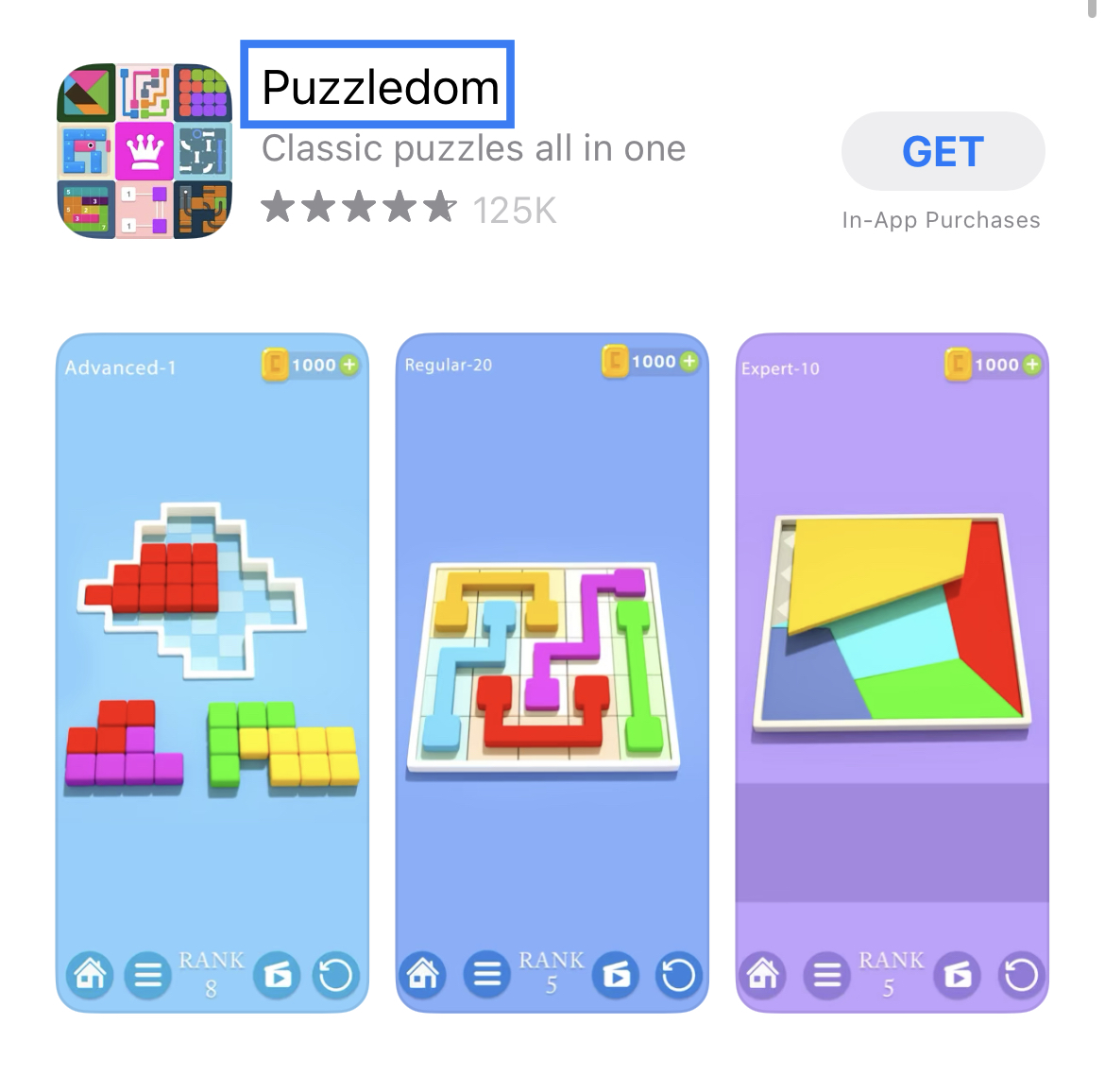 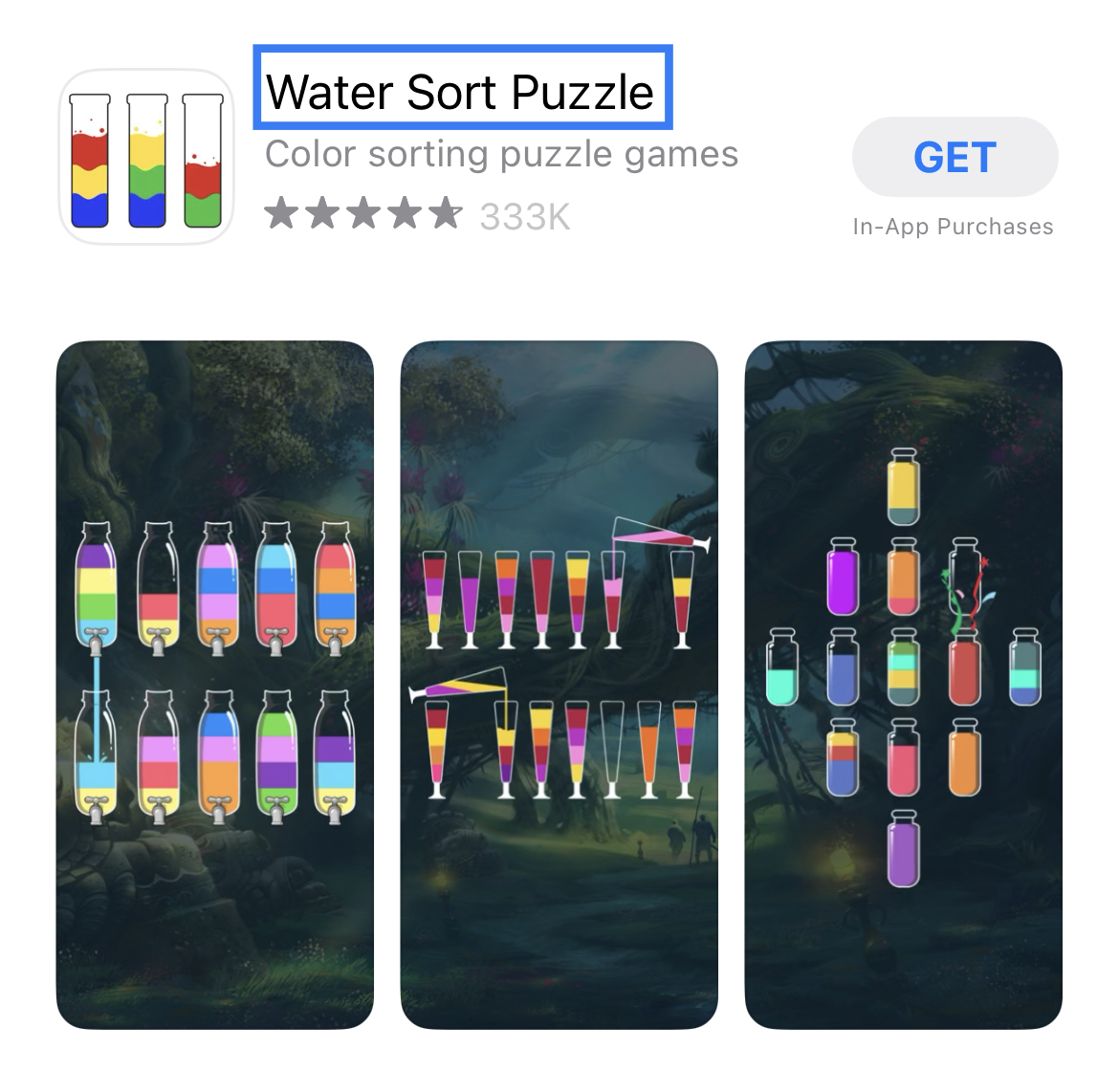 Including the word “puzzle” or variations of it could help build relevance for users searching for this type of game.

Sugar (game) does not currently include any title tag to explain the main function of the game. It isn’t until readers reach the description that they find the term “puzzle game”. Developers could include a title tag related to the game type, such as “puzzle”, to provide context that is visible from the search results.

By including title tags that incorporate puzzle-specific terminology, functionality, or feature-related terms, Sugar (game)’s developers can potentially increase app rank as well as accurately communicate what their app is about. As it stands, the term “game” is the only copy in the title that hints at the nature of the Sugar (game) app, with little additional context. 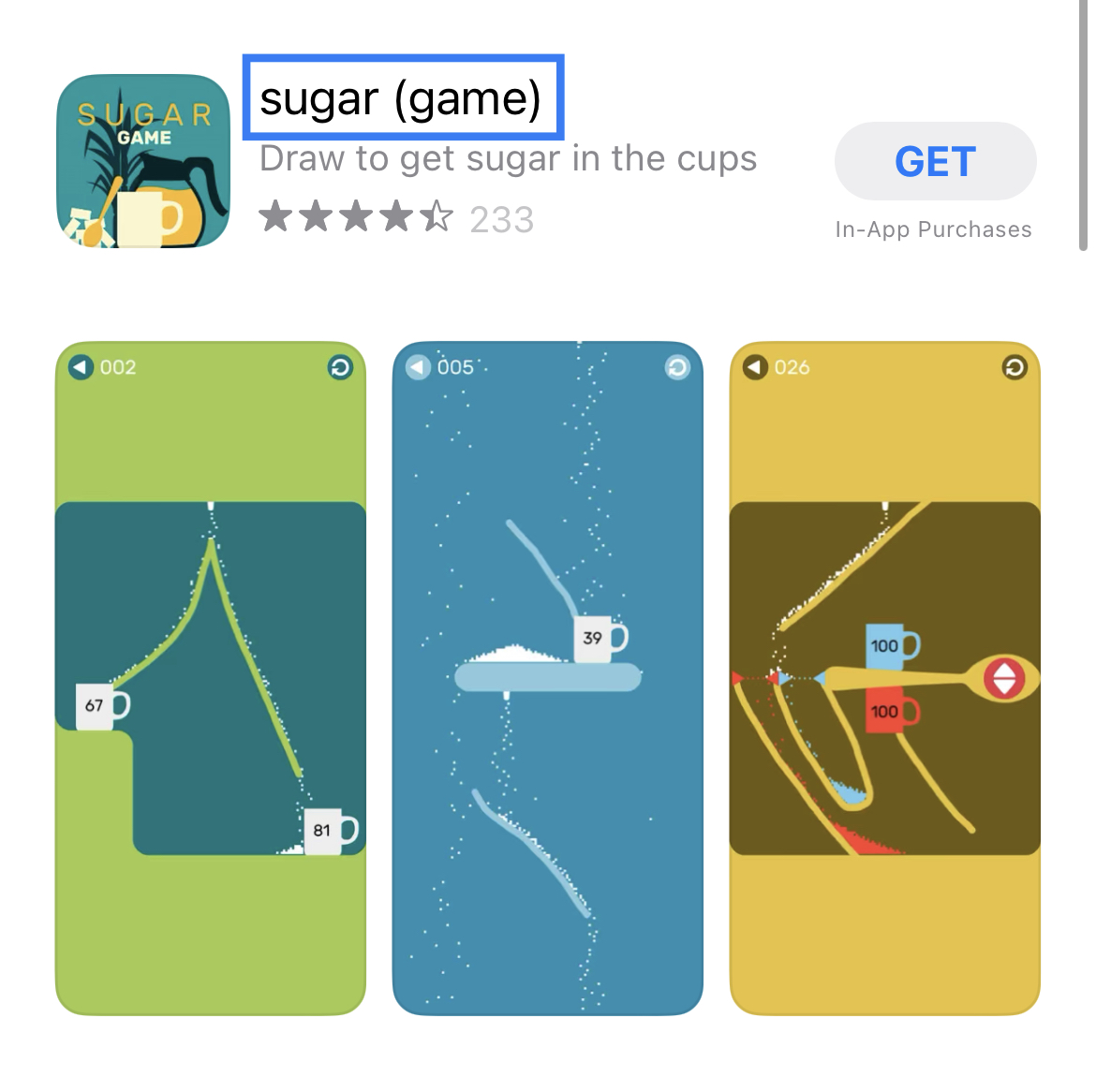 While the majority of users download from Search, users who enter the Product Page will see the description. An optimized description can be the difference between receiving a download or a user skimming over the app in favor of another one. To adapt Sugar (game)’s description to ASO best practices, developers can look to implement strategies of the highest-performing competitors.

High-performing competitors in the Puzzle category currently utilize a brief introductory paragraph acting as an opening hook, followed by information about the app. This can be seen with the apps Save The Dog (Ranked #1 for “drawing puzzle games”) and Water Sort Puzzle (Ranked #5 for “puzzle games”). 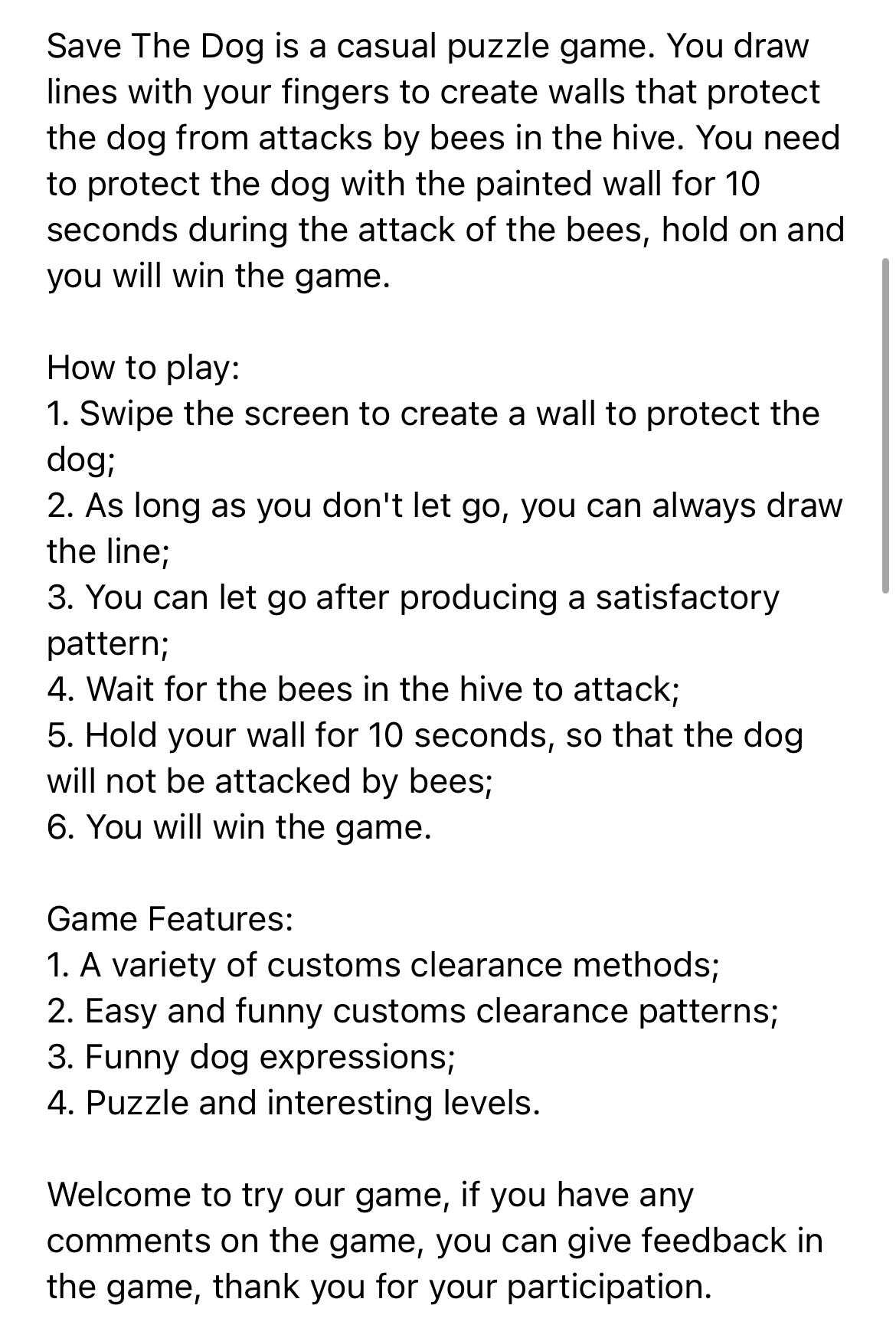 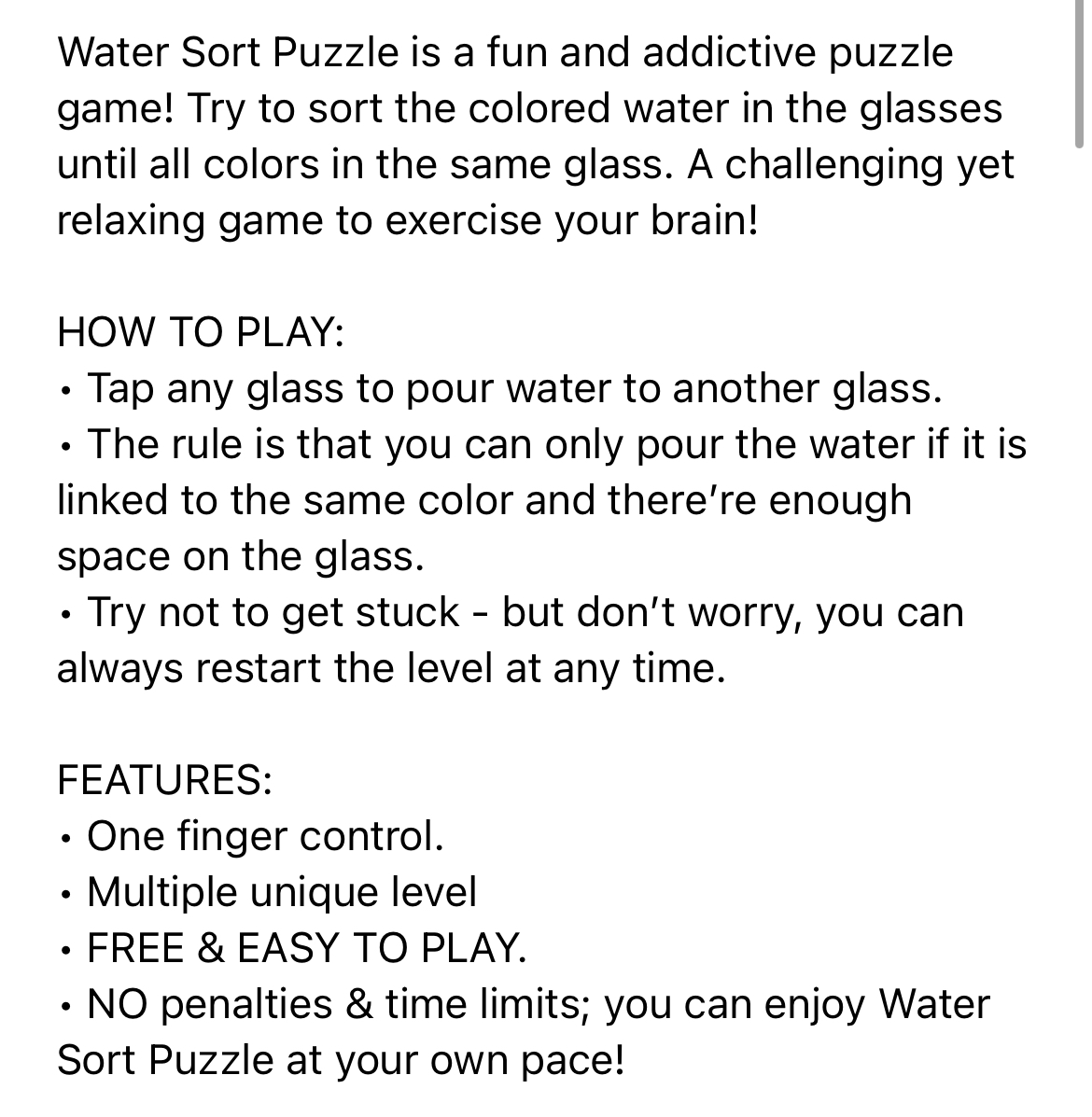 The description is divided into three reader-friendly sections that enable users to know exactly what to expect at a glance.

The current description found on the Sugar (game) product page contains a few brief sentences about the game itself but can do with giving more in-depth information about the app. Following the ASO-friendly description structure shown above can give readers more context on the game and highlight important value propositions offered. 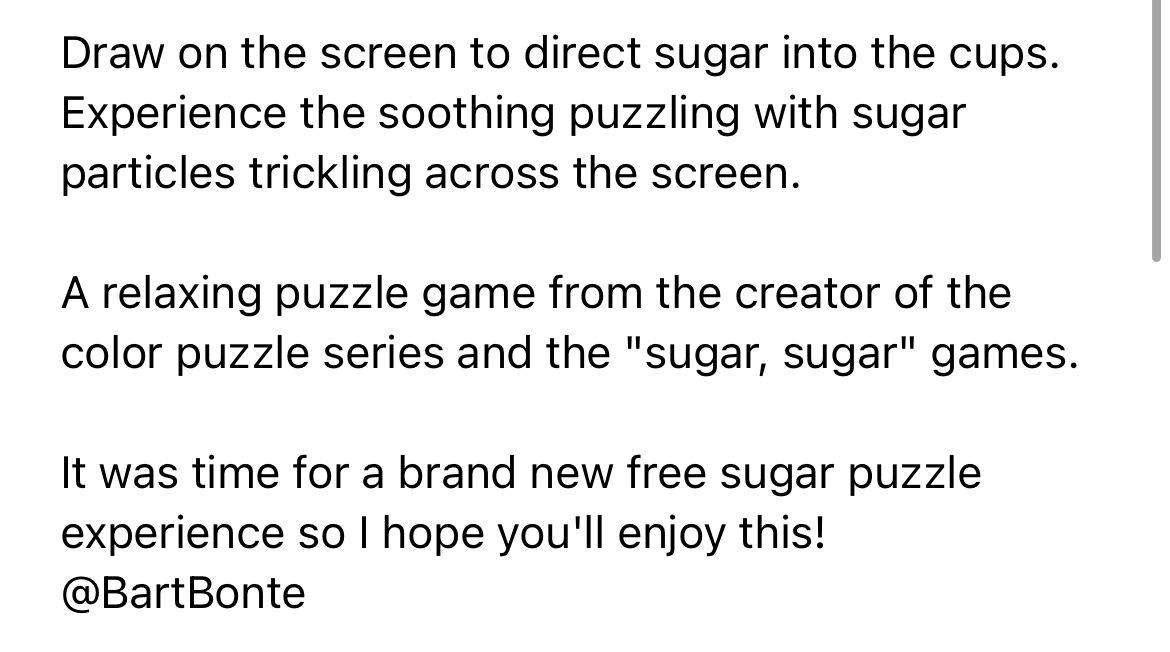 As with title tags, it’s important to perform a thorough competitive analysis to see if there are other areas of an app listing that can be improved. In this case, ASO best practices can also be observed in the screenshots of a number of high-ranking puzzle game apps.

While not all puzzle games are made with the same target audience in mind – some being jigsaw puzzles, word builders, or even riddles – the specific niche Sugar (game) is in contains top-ranking apps whose developers adopt a few common strategies.

A best practice that is implemented in the current Sugar (game) screenshot set is the use of in-game imagery in all of its screenshots. Utilizing direct snapshots of the app in action is an effective way of providing a glimpse into the core game experience. 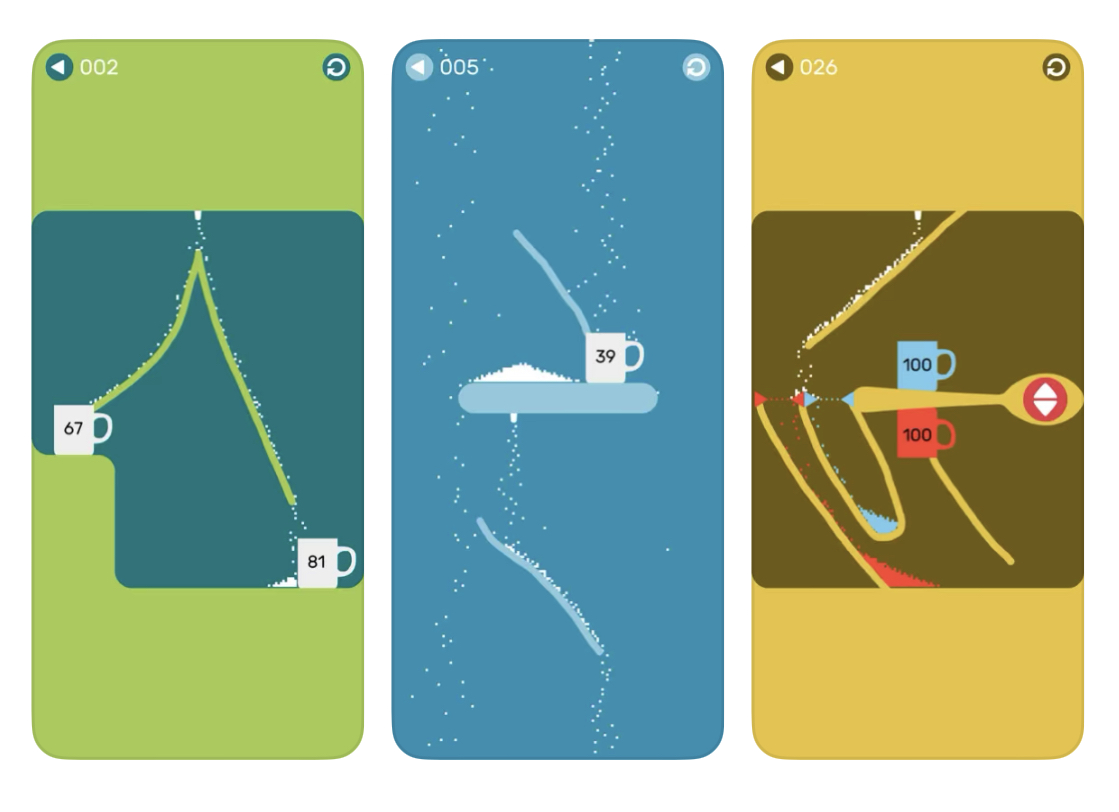 This strategy can also be observed in a number of direct competitors. For example, Save the Dog, Happy Glass, and Love Balls all incorporate in-game snapshots to accurately depict what users can expect once they download the game. Given the effectiveness of this strategy, Sugar (game)’s developers should continue to use app UI to highlight the app, potentially improve conversion rate and stay competitive amongst other apps. 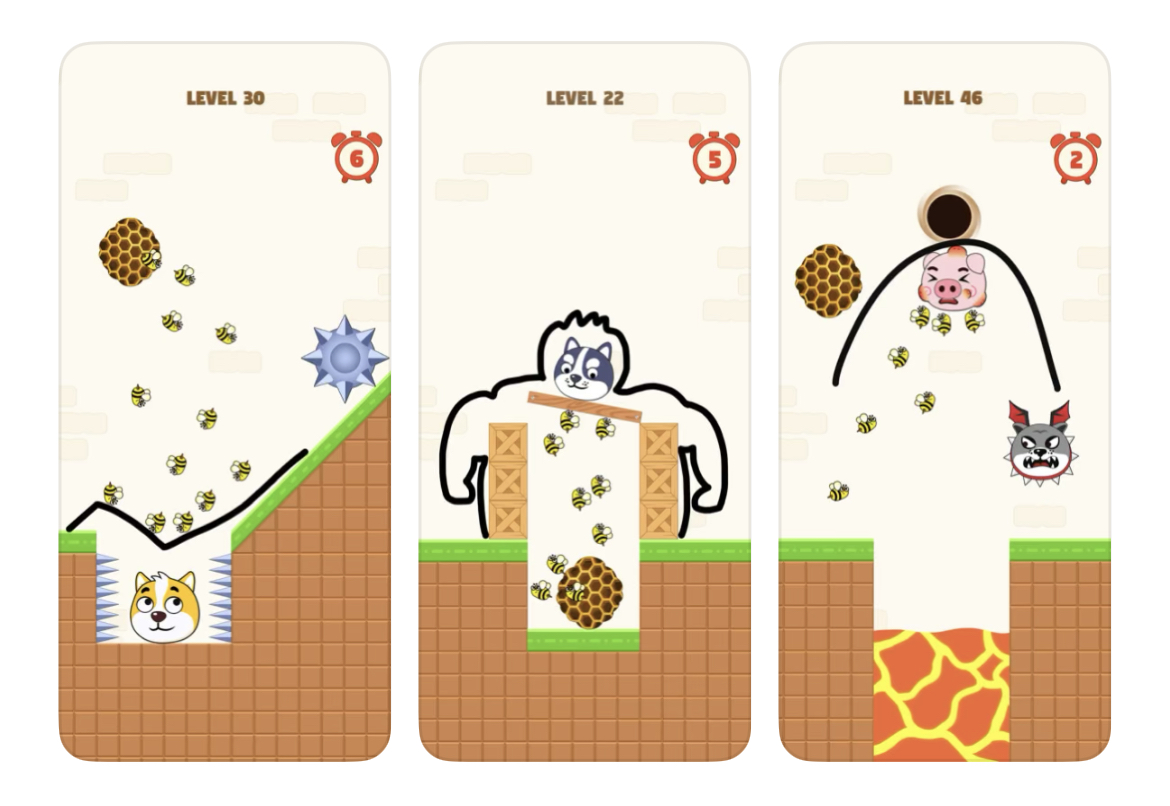 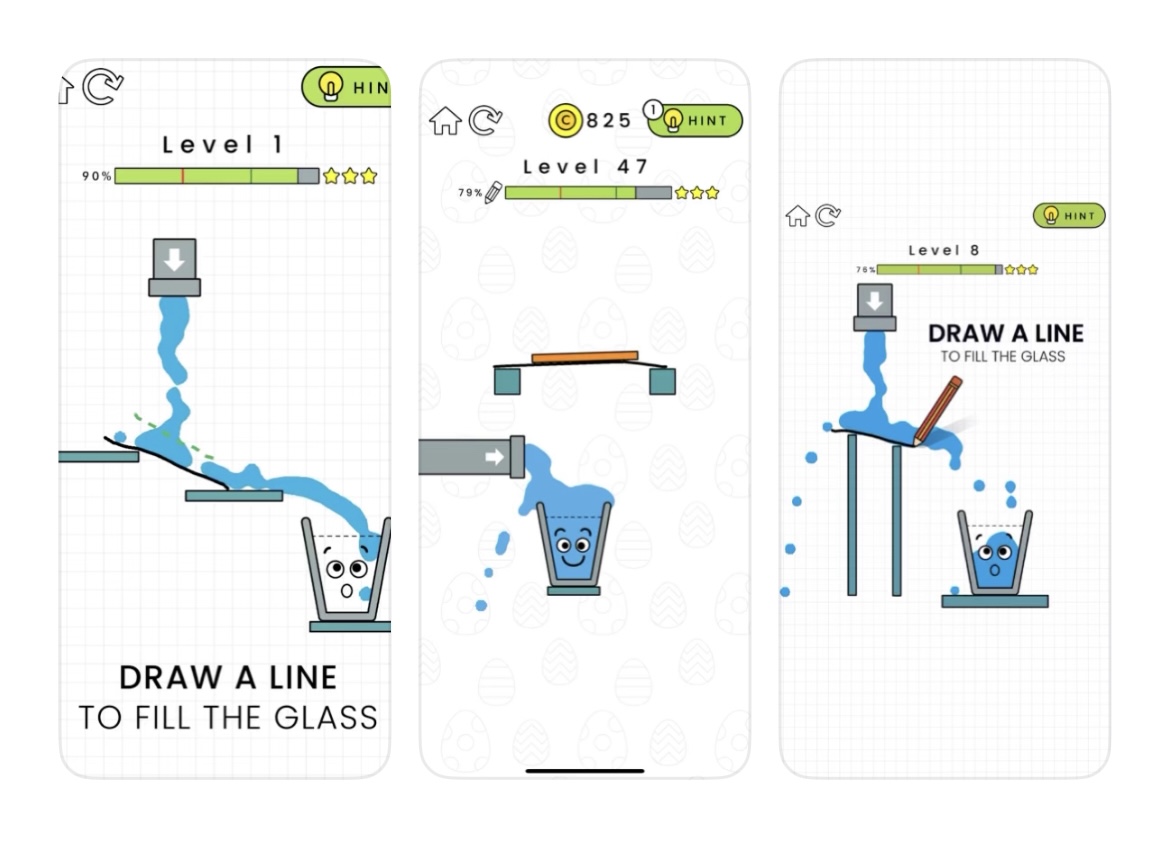 However, app UI screenshots can be enhanced further by including text that supports the images onscreen. This ASO practice can be effective in providing more context on the gameplay being shown by using relevant copy and even keywords to build relevance for users as they browse. Happy Glass’ developers already incorporate this strategy in a few of their screenshots along with other competitors such as Impulse (ranked #4 for “drawing puzzle games”) and Draw 2 Save (ranked #9 for “drawing puzzle games”).

Three of the top five ranking apps under the term “drawing puzzle games” also have an App Preview Video in the first slot of their screenshot set. For specific categories, such as games, Preview Videos can be a powerful tool to capture a potential user’s attention while also demonstrating the app’s gameplay in a more engaging way when compared to a standard still image.

Happy Glass (Ranked #3), DOP 4 (Ranked #4), and Save them all (Ranked #5) all incorporate App Preview videos in their app listing to show the potential user experience and gameplay.

The Sugar (game) app was given an initial boost to visibility provided by their Today Tab feature. With an increase in their number of ranked keywords of about 143% for the month of November, the potential for growth following that momentum should be capitalized upon for continued success. By implementing title tags, adjusting the description structure to favor readability and in-depth information, and modifying screenshots following top competitor strategies, Sugar (Game)’s developers have the potential to build on recent success.

Sugar (game)’s developers can choose to perform competitive analysis to stay up-to-date and edit their app listing on their own or they can leverage powerful ASO tools to help them streamline their market research. Having insight into top-performing title tags, screenshot trends, and description best practices is all possible if the right ASO technology is used.

Need help with your App Store Optimization? Contact Gummicube and we’ll help get your strategy started.

Last-minute invites are among the top things on a party organizer's mind this time of year. Giving them a convenient tool to coordinate their festive celebration is something Invitation Maker's developers prioritize. However, is their app listing optimized to reach enough party planners in time for New Year's?

Nordstrom has been a major player in shopping for some time. Can their discount app succeed in the App Store in time for holiday shopping? 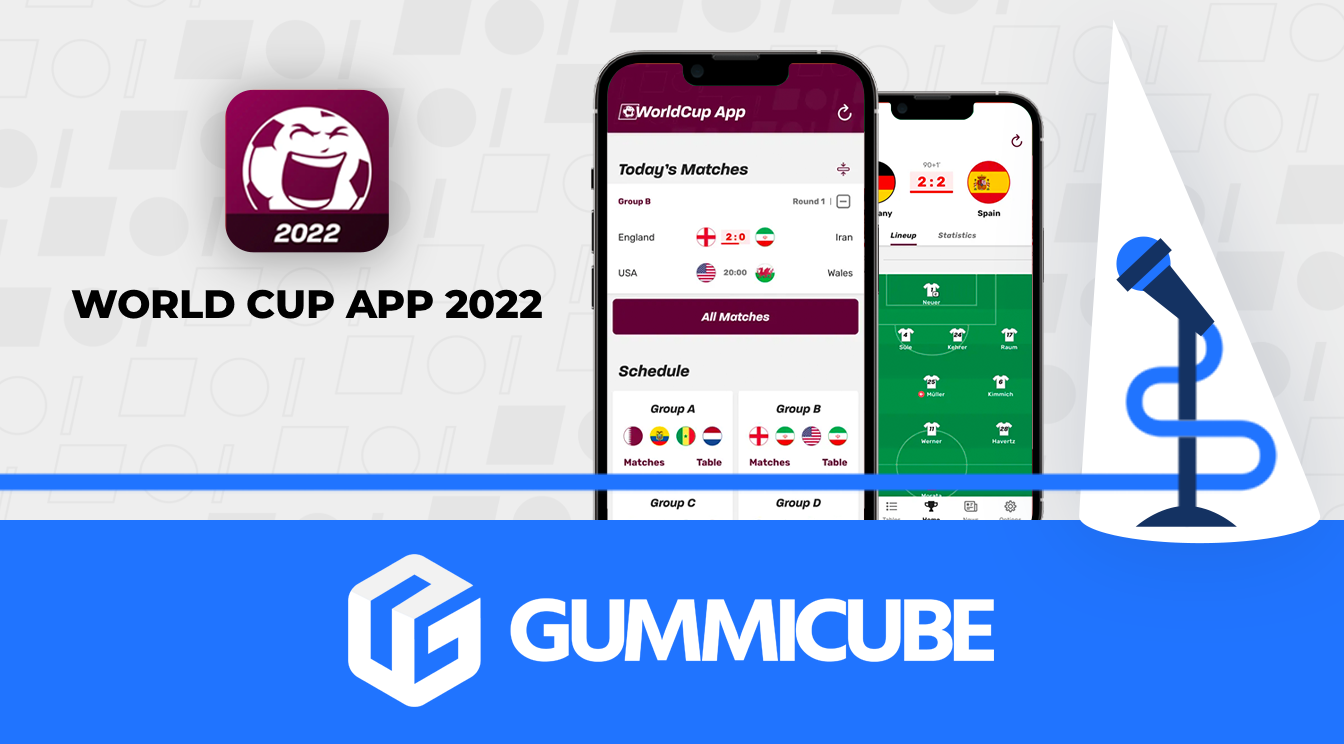 The World Cup is just days away. Can World Cup App 2022's developers optimize during this critical time for sports?